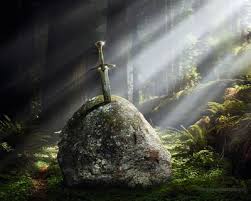 There’s something about swords that really captures people’s imaginations. Not only are they the traditional arms of war and combat, they also represent chivalry, conquest, and power. Out of the thousands of swords that have been swung in glorious battle, however, two stand out above all the rest.

The Excalibur
Belonging to the legendary King Arthur, Excalibur’s place in sword history is without question. According to the centuries old story, the mystical sword was anchored tightly within a large stone.

Inscribed on the stone were the words:
WHO SO PULLETH OUT THIS SWORD OF THIS STONE AND ANVIL IS RIGHTWISE KING BORN OF ALL ENGLAND

Lured by the chance to become king, many tried, but even the strongest of knights weren’t strong enough to remove the sword from the stone. Nobody was able to pull it out that is until a young Arthur drew this mystical sword from its rock and was thereby recognized as the rightful king of England. Eventually, the young Arthur grew up into a seasoned ruler and along with his Knights of the Round Table expanded his kingdom to include all of England, Scotland, and Ireland.

As an elderly King Arthur awaited death, he asked one of his knights to throw his cherished sword into a lake. But, the sword was not lost into the bottom, it was caught by the Lady of the Lake. According to legend, the sword waits patiently for King Arthur to wield it once again in order to should the Kingdom of England ever need to be saved.

In English, Kusanagi no Tsurugi translates to the Grasscutter Sword. But don’t be fooled by such an unassuming name- the Kusanagi is the third of three Japanese Imperial Relics. In addition to the Kusanagi, these items include the mirror known as the Yata no Kagami and a beautiful jewel called the Yasakani no Magatama. Each of these items is significant because they are believed to have belonged to the Imperial Family of Japan since ancient times.

Despite this, the original sword currently exists only in legend. No one is sure about its whereabouts, or even whether it was lost or stolen. However, throughout the centuries, the Emperor of Japan has always kept a replicated copy of the Kusanagi close at hand.

Even today, the sword continues to play an important role in Japanese culture. A replica of the Kusanagi, along with those of the other three relics, was presented to the Emperor of modern Japan during the ceremony for his ascension to the throne.